The spatial distribution and temporal evolution of key intermediate plasma species including ions, neutral metastables, and reactive species are vital to the understanding of plasmas and reacting flows. In particular, quantification of atomic neutrals such as hydrogen, oxygen, nitrogen, and carbon are crucial, because of their high concentrations and reactivities. Many low-temperature and highly nonequilibrium plasma sources, operating in atmospheric-pressure gas and liquid environments, are in the initial stages of development. This section contains a discussion of the recent developments in 2D imaging of key species, as mentioned earlier. 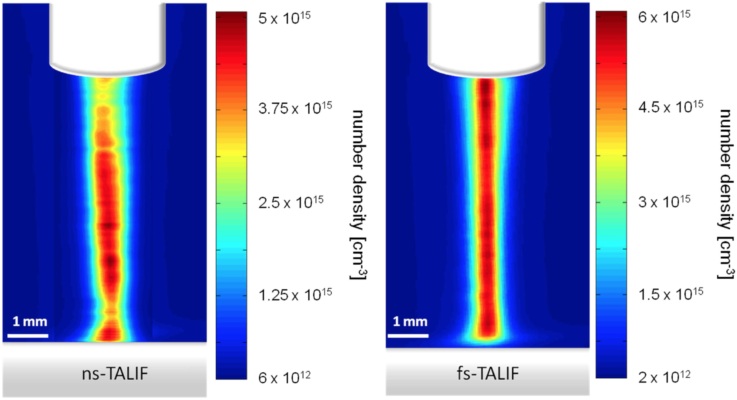 Composite planar image of the H atom in a 1% hydrogen-in-helium mixture at 100 Torr total pressure. The image is generated from fluorescence collected 25 μs after voltage onset. Broadband image obtained under the same condition is shown on the right.

For a detailed review, please see:

Spectral Energies is ready to provide the engineering, research and design support you need to drive business. Please leave your name, contact information and a brief message and we will respond quickly.